Beaches, sandbanks and mudflats are important areas for shorebirds (wading birds and seabirds). More than 40,000 migratory shorebirds visit the area each September to April and Moreton Bay is internationally recognised as a Ramsar site for its importance to the survival of these birds. At least 32 species of migratory shorebirds have been recorded in the park, including eastern curlews, grey-tailed tattlers, red-necked stints, ruddy turnstones, bar-tailed godwits and sandpipers.

Disturbance, which is any action that interrupts the breeding, feeding or resting of shorebirds can cause a shorebird to take flight. This represents a significant disturbance as it makes the bird waste vital energy. 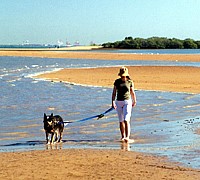 Keeping a dog leashed while on the beach; Image: J Esdaile

Shorebird disturbance can be prevented by:

• Keeping domestic animals (eg dogs and horses) under control and well away from shorebirds. Every time shorebirds are forced to take flight, they burn vital energy

• Avoiding driving or operating all forms of vehicles, vessels and recreational devices near shorebirds. A shorebird probably thinks a kite surfer is the biggest predator it has ever seen!

• If fishing from a sandbar, choose the opposite end to where the birds are gathered

• Consider how our actions may disturb shorebirds. This can include where to set up camp or a simple stroll through a roost site at high tide

• Sitting quietly at a distance and using binoculars, for a good look at shorebirds

By disturbing shorebirds we reduce their survival prospects. Remember it is an offence to cause disturbance to shorebirds and their habitat in Moreton Bay and on-the-spot penalties apply.

Seagrass is central to the marine web of life and supports a vast array of life. Dugong, green turtles, sea urchins and some fish feed directly on the seagrass leaves. Other fish and marine organisms rely on seagrass beds for their survival as part of the overall food chain. All seagrasses, dead and alive, are protected under the Fisheries Act 1994 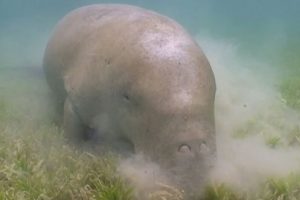 Seagrass needs light and nutrients to grow. They have the highest light requirements of all the submerged marine plants and cannot easily grow in murky water. They thrive in shallow coastal waters sheltered from wave action and strong currents which can erode their roots

Seven species of seagrass are found in Moreton Bay Marine Park, some of these are not found any further south on the east coast 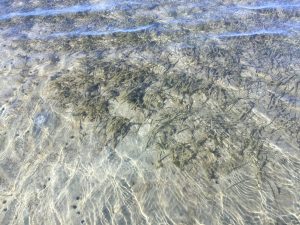 Turbid water caused by sediment runoff from the land and waves and tidal action is threatening the marine park’s seagrass in the western bay. Blooms of cyanobacteria, Lyngbya sp, are occurring more frequently in the marine park and can also lead to seagrass loss

Seagrasses are also threatened by direct physical disturbance such as dredging, bait gathering and vessel grounding

It is very important to prevent soil and fertilizer from being washed off properties or building sites anywhere in the landscape. If left unchecked, they can flow through waterways down to the sea, during rainfall events

The native vegetation in coastal areas plays an important role in stabilising the surface against wind erosion and provides habitat for wildlife. Coastal dunes provide a buffer against coastal hazards such as wind erosion, wave overtopping and tidal inundation during storm events

By protecting and encouraging the growth of coastal vegetation, beach erosion can be reduced and important and unique natural regional assets maintained